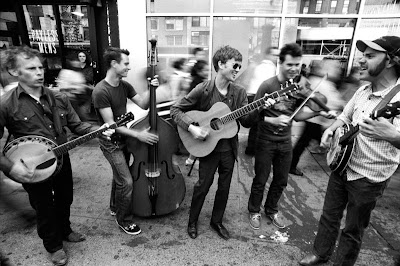 First I heard of the Old Crow Medicine Show, it was a web show early in the decade when people really didn't do that yet. They kept up the OCMS show long after the others because they were so good. I saw the video and agreed. And found an MP3 of one of their songs.

As some of you might know, I used to live in St. Louis. My Mom was watching the games and waving the homer hankie as Ossie Smith and the Cardinals went for the World Series. I didn't follow the games closely, but that song tied into that period of my life, including the move to the South. I love that old version.

And, recently, on a blog, I found a new version.

I put it to you, ladies and gentlemen of the blogosphere: Which is the preferable version? Comment. Show your work.

And of course, support the OCMS by buying their albums and seeing their concerts.
Posted by Unknown at 10:29 PM

You know what, I actually prefer the original. To me, the tempo seems more natural and laid back. The simple combo of acoustic guitar and harmonic is just so classic it sounds right for the song.

Not to dis the banjo, but I think it detracts here rather than adds.

I'm relatively certain that it's an accordion, not harmonica, on the first one. It's Dylanesque wheezing harp on the second one, surely, but the first one sounds like squeezebox to me.

Both come from Hohner, of course.

Damnit, you are, of course, CORRECT! You can hear the chords extend and change cleanly in a very squeeze-boxly fashion.

I still prefer the first, though the second vocal coming in made me jump out of my skin.

patrick said...
This comment has been removed by the author.
Wednesday, 24 September, 2008

Should you feel honor-bound.

The original sounds a bit like a binaural recording; It sounds like Critter is inside my right ear, and everyone else is somewhere off to the left. I seem to be standing inside the bass. It has a good stereo soundstage that sounds more like a front porch, which is where jug band music is supposed to happen. I want to hear more, I want to listen intently, I want to buy the album.

The new is more compressed. It's definitely a studio sound, and I think Critter's been put through the AutoTune. There is no soundstage here, just a "put this on the radio" smooshing filter. It sounds like they got shoved into a studio with a Nashville Producer and felt awkward. I want to tune out, put it in the background and do something else while it plays. If I'd heard only this version, I'd shrug and move on. I don't particularly care if I hear more, it's playing on the radio while I change the oil in my car, I don't want to buy the album.

As far as arrangements go, the accordion feels right, wheezing harp feels wrong. The resonator guitar 'n' banjo 'n' evr'ythin' else in the new version feels packed in and overproduced. It's "I have a story to tell that comes out in the form of a song" versus "We're going to play a song for you." I'd rather hear the story, even if it makes the pitch in his voice waver a little bit. At least it's honest.