First things first: I've seen suggestions that you drink coffee right before you take a nap, so when naptime is over and your body has metabolized the caffeine, you're energized and ready to go. So, as I sat awake at 1:30 am, knowing that call time was 7:30 am, I started thinking I should've had that cup of coffee right before I crashed, or not at all, instead of at 6 pm.

Song list starts with slide guitar. I'm not Sonny Landreth, but the song didn't need that, but it needed someone who could do it. Made me happy.

Normally, I bring my pedalboard because I know all the pedals, but I was asked to use their pedalboard, which includes a volume pedal, 2 "dirt" pedals, a compressor that I can't discern, a Line 6 DL4 delay and a Strymon Blue Sky reverb. I was hit with the following issues:


I didn't really debug the hum at first, but eventually I learned that the hum was between the wireless (turned off the pack; hum still there) and the volume pedal (heel down; hum gone). So, most of the practice was a struggle to not just sound like a beehive.

So, when it came time to play for real, I brought my Squier HH Tele. I love it; it's easily the lightest electric guitar I own, and I don't think I've put on new strings yet, so it didn't have the eights and the string tension was high enough for me do better with slide. The humbuckers were enough to drive the pedals to get the better distortion from the pedals, which meant that I could get enough of a rhythm crunch for the points I wanted it.

Also, I was plugged directly to the pedalboard, so no hum!

First pedal on my board is an always-on EHX LPB-1 to get my clean volume about the same level as my dirty volume. I dial my gain to the point where I'm well in the grinVd on my dirt pedals. I'm thinking 1) adding at least the capability of more output for the guitar is a good thing, and 2) perhaps I go for too much crunch on those pedals. My "lead" distortion is a Washburn Soloist, which was inexpensive and I think is beginning to show signs of failing, and I'm considering a replacement.

The Strymon is a very ambient-safe reverb, with a shimmer set on the Favorite pedal, but I was able to make it work for the slide, and I'm thinking I need to get something, maybe more like an EHX Holy Grail to go at the end of my chain. It's really good, but not me.

So:
Posted by Unknown at 6:00 PM No comments: Links to this post 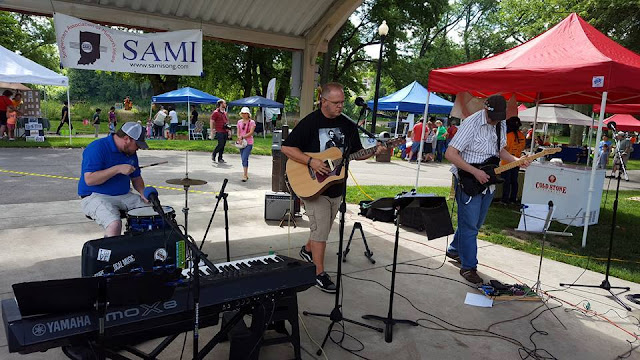 This was a few weekends ago, where I ably backed Greg Jones. I'm the one on the right, hiding behind my hat. You can tell it's me by the murdered-out #1.

This was after one rehearsal, and I was really uncomfortable with a lot of the material, so I spent more time looking at my feet, my chord sheets and pedalboard than is good. I'm sure most pics of me that day would look identical to this, with me not looking out at the audience. I need to work on stage presence.

Greg plays Americana, and I felt one song really worked with a slap-back guitar, along the lines of Luther Perkins. I can play a rockabilly boogie-woogie in Perkins' strange kind of way, but when it came to playing a lead, I just kinda doubled down on the rhythm. The slapback boxed me in, in a way that the dotted-eighths of the Edge and so on never really did.

But, I enjoyed the songs, playing, playing in front of people, and playing with another drummer. And yes, to get the right sound, we used a suitcase as the kick drum.
Posted by Unknown at 5:38 PM No comments: Links to this post

Email ThisBlogThis!Share to TwitterShare to FacebookShare to Pinterest
Labels: after action report, guitar

What The Sam Hunt is going on?

I don't listen to radio. If I hear new music, it's largely EDM-based or indie rock from Spotify. So, it's a rare thing where the hot new thing on radio hits my ears.

This is Sam Hunt.

What do I think about it?

I'm not a great fan.

Time was, "country" was the barely-changed-from-Scotland-and-Ireland music of Appalachia. That's a big chunk of the Carter Family songbook, but it isn't all. Plenty of their songs end with "Blues" and fit the format. They might not be Blues quite the way that Memphis Minnie might've done it, but they were Blues: 12-bar with AAB rhyme scheme.

And if the Carter Family weren't bluesy enough for you, "T For Texas" by Jimmie Rodgers should be, and both were there in Bristol, Tennessee, at the beginning of Country music. Making black popular music palatable for rural white audiences is a part of what Country has been about since the beginning.

Western Swing, like Bob Wills and his "Faded Love" and "Big Ball's in Cow Town", is an attempt to make Swing music palatable for rural white audiences.

Rockabilly, like "Blue Suede Shoes" by Carl Perkins, is an attempt to make Jump Blues palatable for white rural audiences.

That isn't the only tendency in country, but I believe I have shown that this is a core one.

The above track, Sam Hunt's "Make You Miss Me", is an attempt at a Slow Jam. Is it good? I don't know. When I want a slow jam, I go to Tyrese. But it certainly fits the genre. Which means, while I might not like the song (or maybe I do), it fits in tendency of Country music to take on aspects of Black music.

And it's an alternative to current country basically being 80s hair metal with a banjo in the mix.
Posted by Unknown at 1:41 PM 3 comments: Links to this post

Greg Koch is the funniest man in music these days, and here he's showing off the new Fluence pickups from Fishman. I couldn't make them sound as good as he does, but he certainly makes a case for them here.

I might want a PowerBridge up in there, too.
Posted by Unknown at 5:04 PM No comments: Links to this post

I didn't just complain on my blog yesterday.

I also got the order ID, registered the Kliq pedal, and submitted a report of faulty gear.

They took my address and shipped me a new pedal. In fact, I know it's in town already.

We'll see how long the new one lasts, but I have to say their customer service is right on. After a few times playing out, I might revise and extend that Amazon review.

Posted by Unknown at 10:14 AM No comments: Links to this post

For Christmas, I asked for and received a Kliq TinyTune tuner, which I placed at the end of my pedalboard, taking off the EHX Signal Pad I had used as my mute. There are three things I needed on my board that a tuner pedal provides:


First time I took the board out of the house, I found that the pedal was stuck in the "on" position, meaning it was only in mute/tune position. Far better than it being stuck in bypass, but it did mean I was quiet.

I've been torn between two pedals recently. My Washburn Soloist, switchable between overdrive and distortion, sometimes sounds acceptable and sometimes sounds horrible, so I don't trust it. My Digitech Death Metal has too much gain, and I struggle to find a way to make it sound like something other than a hive of angry bees. I've found the secret is to cut back on guitar volume. I'm still not sure of the use, but that's where I'm stuck right now, with my Bad Monkey as my go-to dirt pedal. These Digitech pedals have two outputs: To Amp and To Mixer, and I was able to use that as a splitter to allow me to feed the tuner without killing my output.

I also had extra power and the Soloist around, so I put that in the chain and turned the volume to zero to mute. I suppose I could've done the same with the Death Metal, but oh well.

As a tuner, I'm happy with nearly everything about the Kliq. I have another tuner, about the size of two normal pedals, and the size of it makes it useless to me. The Kliq is the size of the TC Electronic Flashback Mini, so the size is right. It's bright enough and fast enough, and the price was right. I hope to get the registration and warranty issues worked out soon so I can get another tuner on my board.

I should also mention that I broke a string mid-song. I had replacement strings, but should've had a second guitar instead (and usually do). As the SEALs say, "Two is One, One is None", so be prepared.
Posted by Unknown at 1:59 PM No comments: Links to this post