June Lullaby @ le Réservoir, Paris, le 27 juillet 2010
Originally uploaded by bcbfan
I wasn't there. Don't know if it rocked. But this is a great Tele shot.
Posted by Unknown at 1:15 PM No comments: Links to this post


Still, this is absolutely gorgeous, but a mere fraction of the power that was achieved at the Crossroads concert. I need this in my collection.
Posted by Unknown at 11:53 AM 2 comments: Links to this post

Just got back from watching the footage from the 2010 Eric Clapton's Crossroads Guitar Festival. A few notes....

I'm older than Robert Randolph and I still want to be him when I grow up.

I have read interviews with Sonny Landreth. I have heard albums. I've searched on Youtube. Now I have seen him do it on a screen taller than I am. I still have no idea what he was doing.

There's a beautiful song that Derek Trucks and Susan Tedeschi did, called "Midnight in Harlem". When it comes out, I need to get it.

John Meyer can do a convincing version of "Power of Soul".

Buddy Guy has been a recording artist since 1958. He has been recording for over 50 years. The man doesn't look 50. It's amazing.

I get why Eric closes these with Steve Winwood. I get it. I do. I like Blind Faith as much as anyone. But I think Steve phrases enough like Eric, on guitar mostly, that having both play guitar, having them both play Eric Clapton Signature Stratocasters through similar amps, doesn't allow them to distinguish themselves enough.

It'll be out on DVD/Blu-Ray in October.
Posted by Unknown at 11:08 PM 1 comment: Links to this post

Goin' Down To The Crossroads

I have two tickets. Tell you about it tomorrow.
Posted by Unknown at 12:42 AM No comments: Links to this post

A Bunch of Nothings

Got the new Premier Guitar. Haven't read much yet. There's a story on Parsons Guitars that includes many great guitar shots. There's a story on the Black Keys that looks to be good. Love Brothers. Like the "Unsung Heroes" story, but they missed a trick by not showing his rig, which is the wildest head-and-cabinet set I've ever seen. 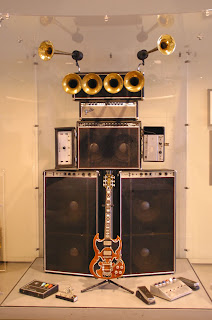 And there is word coming of a Premier Guitar TV show. I would DVR that and replay the heck out of it.
Have the new Guitar Player. Read more of it. Haven't read the Steve Miller article yet. Don't know if I will. Don't really like Steve Miller.
I've been having an idea. The Sonuus is a guitar-to-MIDI converter. It's monophonic. The MoPho is a monophonic synthesizer, in the old-school analog sense. So, any signal that a Sonuus could handle, a MoPho could handle. The MIDI Mouse would allow you to go between presets so you could have it all floor-mounted. And thats only $600, which I don't have, and that's before the A/B/Y switches you'd want to switch between normal and synthy. But wouldn't be cool? Wouldn't you sound like nobody else?
Posted by Unknown at 9:00 PM No comments: Links to this post


The white old-style strap looks good on a white-guard blonde Tele. And the second recorded player who actually used the ashtray bridge cover.
Posted by Unknown at 6:58 AM 2 comments: Links to this post

Get Clayton Golds direct.
Posted by Unknown at 6:32 AM No comments: Links to this post