All Songs Have The Same Chords

I am sure I've posted this before. But it is timely.

Stratoblogster posted a link to Axis of Awesomeness proving that a third of all popular songs use the same I-V-vi-IV progression.

Email ThisBlogThis!Share to TwitterShare to FacebookShare to Pinterest
Labels: fun with theory, offerings of sound 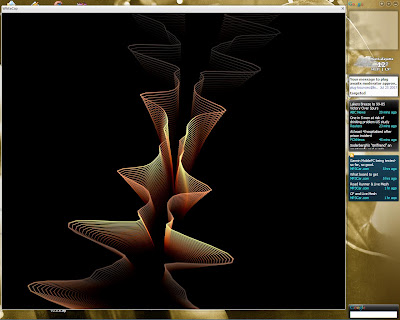 I've been looking at using my computer to do effects for my guitar. Specifically Max/MSP. I haven't really put it into place yet, because I don't want to burn off my 30-day trial on days when I'm not going to be able to play with it. The number one thing I'm seeing with that is that you would have huge programmed music filters that you'll want to switch between, and you'll have a guitar in your hands and thus you won't have anything available to switch things around. I suppose people making music with laptops are more keyboard people.

The image shows Whitecap visualizer. It's visualizing the output of my multieffects unit plugged into the audio-in plug of my XP box. I think this could be a cool thing, but I'm thinking about the psychedelic Joshua Light Show at the Fillmore. You'd think that someone would make a music visualizer for computer media players that tries to look like the Joshua Light Show. It seems like a no-brainer.
Posted by Unknown at 7:09 PM No comments: Links to this post

It's a Burning Thing


Stratoblogster pointed it out to Pribek.
Now I'm pointing out to you.
Posted by Unknown at 8:23 PM No comments: Links to this post

I used to think that the brain was the most wonderful organ in my body. Then I remembered who was telling me this.

—Emo Philips
Posted by Unknown at 2:24 PM No comments: Links to this post

1) Remember my headphones? Well, I had some sound problems last night. At core, acoustic guitar on Wednesday and not on Sunday, sound guy not available, so I was turned way down at the board. I had my right earbud in and my head turned a little left, playing in soundcheck and trying to munge my gear, and I could barely hear myself. Later, after everything worked out and I could hear, I found myself turning the drummer up. Normally, with the old headphones, I'd turn the drummer all the way down and still have too much drums, because of leak-through.

Them Skullcandy 'phones are a major win.

2) Once we got someone who could mix me in, my new D/I box worked fine. Great, even.

3) During the instrumental parts, the other guitarist and I switched off each verse. First time, he got caught a little flat-footed in the switchover, but he stepped up. Amped-up electric guitar switching with clean acoustic. I would love to hear what it sounded like out in the house.

4) The other guitarist is building a home studio. He has the PC, which has much memory and a 120GB hard drive, which should be fine for now. He has a Tascam 2488 which he would like to use as the front-end for his recording. He's not like me. He's not a geek. He's OK with MIDI and he likes his VG88 and all, but when it comes to computers, he's totally n00b. Can anyone suggest a good, cheap recording package that won't choke on Vista?
Posted by Unknown at 11:49 AM No comments: Links to this post

Marty Stuart has a show on RFD-TV, which you might not be sure you have. I wasn't aware I had it until I did a search for Mister Marty Party himself, after which I said "Well ain't that a humdinger". Brother Kenny is one good picker, and while I can listen and watch and say "this is good music", I could imagine my wife and two of three kids watching and just enjoying the fun. My eldest would just consider it to be corny and stupid.

Ever really listen to James Brown? I mean, hard? I drove the two big kids to a church-sponsored New Years' thing, and on the way back, I started counting measures on "Get Up (I Feel Like Bein' a ) Sex Machine". Count the times you hear "Get on up!". If I recall correctly, he goes 13 times the first time, five times the second, and four times the third. That is so interesting. He's putting it together as he goes along, assembling pieces of song. No overriding structure, except what he calls for. Or negotiates with his band. "Can we take it to the bridge?"

I got a video from Netflix a while ago. Monster Licks and Speed Picking. There's stuff to consider and stuff to learn, and there's enough bad video from good guitarists that a video that isn't great still passes on the curve. But I have to say, if you aren't learning, if you have an arm used to alternate picking, learning sweep picking is tough. You almost have to relearn everything. Tough.
Posted by Unknown at 11:24 AM No comments: Links to this post