I play a Tele. I play clean. Normally, this means I have icepick tone, sharp treble that just pokes in the ear. The good thing about it is that you can always find yourself in the mix, but the bad thing is that you can't hide if you're having an off night.

Tonight, I tried a new, similar patch. And it was a ball of mud. No definition, all low end. This on my Tele strung with .009 strings. Normally, the thing has no bottom end. I could not find any top end with that clean patch.

During sound-check, I was playing around with patterns, adapting one that I learned off the Tommy Shannon bass tape, which, when put to B, is a lick from Billy Idol's "Rebel Yell". Isn't it enough to make you want to pull out the ray gun? But, while playing around with it in another key (F#, which I'm not sure is the right chord but I think it might be) ... "We've Got The Beat". Go-Gos. Who, remember, were so wild they got tossed out of Ozzy's backstage when he was still snorting ants and biting the heads of small flying animals.

Meanwhile, we didn't have a bassist — and if he called in and begged out, I never heard it — but between my mud, the piano and our friend coming back to sit in on organ, the low end was covered well enough. But still, it makes me very much want to get a bass. If you have two guitars and no bass, that's not right. And a whammy pedal set for going down an octave? That doesn't really do the trick.
Posted by Unknown at 10:31 PM No comments: Links to this post

Tales from the life of an "almost professional" musician

And found the room dark.

Practice was canceled due to the leader having health issues in the family. The email telling me this was sent around 5:30pm and arrived around 9:30pm. So, that was annoying, frustrating, and, finally, saddening.

We play through DI boxes. The other guitarist and I use multieffects boxes to juice our signal a little, but the bassist doesn't, and so, it is a rare and unusual thing for him to be noticable in the mix. But tonight, he was out in front, which was fun.

Soon, he got it. The other guitarist joined in, going an octave up, to "Bink!"

Not funny in the telling, I suppose, but it was funny at the time.
Posted by Unknown at 10:53 PM 2 comments: Links to this post 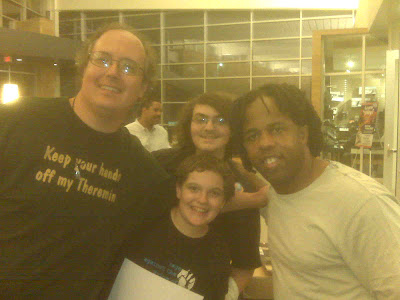 On Monday, I took my two biggest sons to Sweetwater Sound in Fort Wayne to see a clinic with Victor Wooten and J.D. Blair.

OK, just in case you don't know, Wooten plays bass for Bela Fleck and the Flecktones. He plays Fodera basses and Hartke amps. He has been featured before on this blog, in the inaugural post of the 'man that's deep' label. There's also some points to add to the 'how to not suck' label. But we'll get to that.

On improvisation vs. repertoire:"The fewer songs you recognize, the better night we're having."

Of course, he's a massive player. He, a looper pedal, and a great drummer can make all the music you'd want.

Gearhead Paragraph: He had two bassists, one a 4-string yin/yang bass tuned EADG with a Hipshot D-tuner and another bass tuned ADGC: a 'tenor bass' in his terminology. Both have 24-fret necks. He uses nickel strings, a Boss RC50 loop pedal, a Peterson tuner pedal and had a Hartke stack with a 4x10 cab for high notes and a 1x15 for the low. He uses a hair tie to mute the open strings — I call it the Greg Howe trick because that's where I saw it first — He has basses with Kahler tremolos, fretless basses, five-string basses with MIDI pickups, but he didn't have them there that night. But that is what he uses. If you try what he likes and don't like it, he doesn't want the blame, and if you try what he likes and like it too, he doesn't want the credit.

On endorsements "Don't buy something because someone uses it. Try it out because they use it, but only buy it if you like it."

On the transitive nature of instruments "Bass is more a role than an instrument."

The coolest thing, the thing I want most to try, is his groove/rhythm exercise. Set up a long drum pattern on your drum machine. Set your drum machine so it plays that measure four times. Find your groove in that. Get into it.

Then replace the fourth measure to silence.

This will tell you your tendencies, if you tend to rush the beat or lag. And, if you know, you can start to work against it.

This is when you swap out the third measure.

Then just have one beat, one note floating in a sea of silence.

I have yet to try that exercise. But it sounds like a perfect get-the-groove don't-suck kind of exercise, doesn't it?

The final point: it is far more pleasant to be in the electric guitar room at Sweetwater after a Victor Wooten clinic than after a John 5 clinic. Bassists who play with each other are much more pleasant to be in a room with than guitarists who don't.
Posted by Unknown at 10:57 PM 1 comment: Links to this post

Email ThisBlogThis!Share to TwitterShare to FacebookShare to Pinterest
Labels: how to not suck, man that's deep, true life


Jim Carroll
Posted by Unknown at 11:36 PM No comments: Links to this post

Email ThisBlogThis!Share to TwitterShare to FacebookShare to Pinterest
Labels: the present day composer refuses to die

Perhaps this is a lesson in ergonomics.

Phil Collins was the drummer for Genesis, and when Peter Gabriel left, he took over the singing duties, but he always saw himself as a drummer first.

But no more. Due to spinal injury, he's giving up the drums. Evidently, it's hooked to how he sits on the drum throne.

I've never really looked into ergonomics, especially the ergonomics of guitar. I know that I used to sit at an ergonomic desk with a keyboard extender that sat below my knees. That desk actually hurt me until I took off the keyboard extender.

Anyway, I always liked a bunch of his work. Sad to see him leaving the drum kit.
Posted by Unknown at 10:55 AM No comments: Links to this post

I was playing my son some Supertramp. I don't know why Breakfast In America came back to my attention recently, but there it is. This evening, it came up because the family saw the Star Trek reboot, and when you think Spock, you should think of "The Logical Song".

But this brought to mind an element of my youth. I remember stopping by a friend's place, and his brother was there, long-haired and shirtless, airbrushing a mermaid on the side of his van, with Supertramp on the boom-box. At this moment, I cannot think of a more late-1970s moment than that. Can anyone one-up me?
Posted by Unknown at 3:40 AM 1 comment: Links to this post