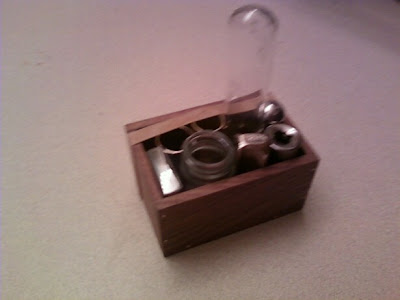 There's the fake Coricidin bottle slide, which I think is a little big but is my go-to. There's the Lowell George-approved 11/16s socket. It's a Craftsman, so if I play my blues hard and break it, I can take it to any Sears and get it replaced. There's a Zippo, which I never really used as a smoker. I think I saw a video of John Mooney playing like that. I have a shiny chrome slide and a less shiny brass one. I think the brass grips a little more, causing more of the characteristic string noise for bluesy acoustic work. I have a Stevens bar that came with my lap steel, and a Dunlop bar I picked up later, and they're heavy enough that I can really only use 'em for action-enhanced steel playing, rather than slide playing on my normal guitars, which is fine. The big one is a threaded test tube I got from the lab where I work when they were ridding themselves of glasswork. I thought I could make it into a bottleneck but never cut it off. I use it for steel stuff but it is light enough to easily go over to the spanish-style guitar, for playing like Danny Gatton and his beer bottle. Except that I'm not that good. But that's OK — saying you're not as good as Danny Gatton is like saying you're bipedal.

I know, this post is useless without audio, so I'll throw that on the list.
Posted by Unknown at 10:22 AM

Email ThisBlogThis!Share to TwitterShare to FacebookShare to Pinterest
Labels: gear

To fit my fat fingers, I had to go up to a 3/4" socket. It feels too heavy to get a good vibrato, but that might also be from having a lazy, weak, fat finger.
My favorite slide for CBG is a copper pipe fitting that I polished to shiny. It isn't quite long enough for regular guitar, but it's more brass than brass, if you know what I mean. Grippy grip grip.
Somewhere in my closet I have the neck of a wine bottle snapped off for you, waiting for the delicate touch of a diamond dremel bit to make it safe to put on a finger. My success rate with the score and thermal shock method has been about 50% so far.

The socket is a bit heavy for me, too, although the more I use it, the better it gets. It's strength training, like anything else.

You've given me one, and it has developed a crack. I like the glass, really I do, and it helps to follow the radius a little, but they're so much more breakable than the pyrex bottle and test tube.

But I do look forward to the receipt of the slide you have waiting for me.