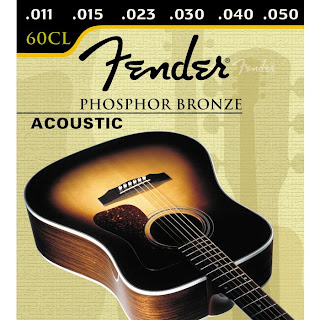 I wrote this in Stratocat's blog: There's only one review that means anything. "I took this to a gig, relied on it when it was all on the line, and it did not let me down.".

I changed strings on my acoustic guitar about two weeks ago. I bought a set of Fender Phosphor Bronze strings, .011-.050. I played on them last Wednesday. I put my guitar in the case. I brought it out again today, getting ready to play. I set up, tuned up, warmed up, ran through the set list, and five minutes before it was time to start, I popped my G string.

I'm kinda broke right now. I didn't buy two sets. I didn't have two sets. That is my bad. I know, intellectually, that if you're gonna be playing out, you bring a spare of anything that you need, and I didn't have spare strings. I tell the story of Madder Rose, who I saw twice. First time, the bass player popped his low E, and spent five minutes of set time trying to beg, borrow or steal a spare bass from the other acts. Next time I saw them, they had another bassist. So, for all you hoping to step up from basement picking to playing out, take that lesson. But that's not important right now.

I play a Telecaster, a DG20CE acoustic and a FM52E mandolin. I am a Fender guy. I hadn't bought a set of Fender strings in a while, but that's more because I have been exploring options. I used to pop G strings all the time, but that was because I was using Hot Licks copper picks and trying to make up with my right arm what I couldn't get with the amplification. Basically, I was cutting at the strings with a little knife and was surprised when I cut through. Not what happened here. I took it to the gig and it let me down. A wound G should last more than a week and a half.